Assists the physical body to connect to the etheric body.

Helps to settle and calm one’s fear of death – can help peaceful transition for the terminally ill.

Place between two people at heart level during meditation for a healing energy exchange.

A powerful tool for shifting patterns in DNA.

Shifts psychological patterns and the beliefs on which they are based.

There are no reviews yet.

Be the first to review “Star Tetrahedron” Cancel reply 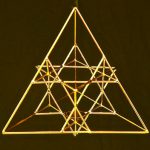 The masterful design of this form enchants and appeals to a higher sense of dimension and aesthetics. This dazzling geometric figure is perfect for meditation and much more. You can create your own healing alchemy. The 3D Star opens the crown chakra and then radiates into the body the energy of whatever you might place inside the 3D Star—crystals, flower essences, herbs, oils, etc. A profound experience that can be physically felt.

The Metatron’s Cube is a powerful form for manifestation and personal integration.

The Metatron’s Cube contains three octahedrons – one inside the other, spaced at a Phi Ratio. Each one is twice the size as the one nested within it. This creates three distinct energy flows in one form to promote spiritual integration, deep emotional healing, mental clarity, and physical manifestation. The number three links people into the infinite progression of dimensional reality.

This exquisite shape is formed around a dodecahedron. Each of the 12 pentagonal faces is extended into a phi ratio star point which create 12 interlocking pentagrams. The Star Dodecahedron has become a popular tool for graduates of other Metaforms and a powerful symbol for divine/human co-creation. It stimulates the heart chakra and helps to move the energy into new levels of conscious awareness. The 12 stellated points activate all the human body's subtle systems, creating a peaceful experience in the integrated polarity of feminine and masculine energy. The Star Dodecahedron produces a warm feeling of transcendence with its symmetrical beauty and adds a radiance to any decor or landscape.